yes hello, and welcome to the Yans World-making-of-section!!

well, ... sorry ... in lack of a better picture (it's the only picture of them together) we show you here where Roland (Role) Wyss and T-ACHE met for the first time while serving the country for 14 weeks as ambulance men in losone - in the italian part of switzerland. it was a dure time. but one good thing about the military is, that you meet lots of other people which are approximately the same age. and there's some really cool dudes among them. :)

that was also the case with role wyss. we both shared our love of music although our tastes were a bit different sometimes.
if we had some time off, we would pick up our guitars and jam or sing a bit togehter.
yeah, and since i distributed my first exercises-tape among the hungry crowd and the rookies, he asked me if i could help him finish his demo-tape called yan's world.
. 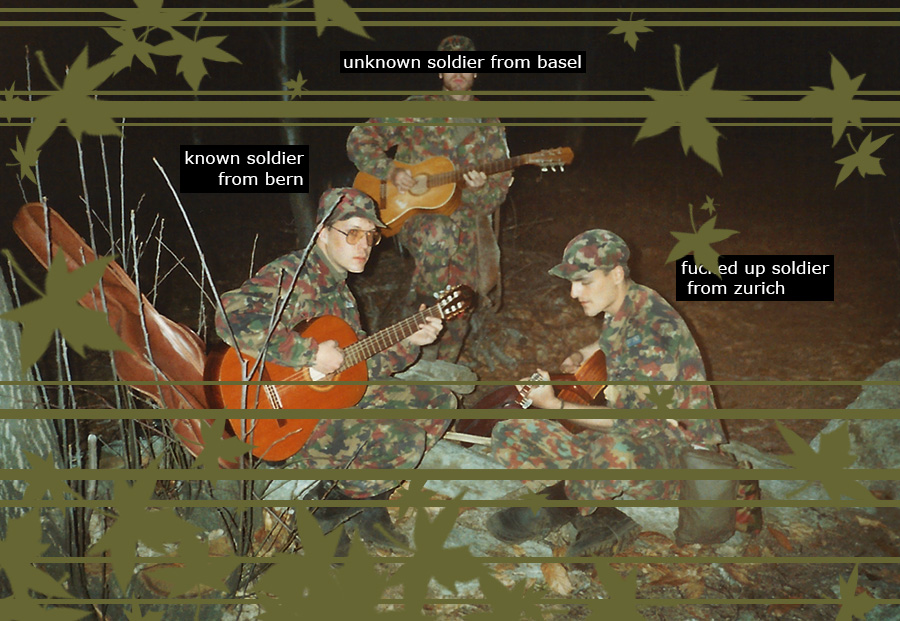 i still don't really know who Yan is, but his songs were great and it was a pleasure to work with role. he had all songs already written but needed some advice and companionship to really finish the project. he had programmed some extraordinairyly cool arabic rhytms in cubase. role came with his atari and cubase files to my home in zurich, where we spent 5 or 6 days tweaking, recording and tweaking again.

we recorded the basic tracks and added some guitar and additional keyboards to it, using my fostex 8-track-tape-machine.
when we were done, i packed my recording-gear in my parents car and we travelled to bern, where role lives, and where he knew some favourite singers and musicians of his. i reckon it was about 4 or 5 different people who either sang, played djembe, flute or some other instruments. i really can't remember it that well, since it's quite a long time ago... (any suggestions role???)

after the sessions in bern were over, we went to my place again to mix the whole thing down to stereo. i remember, that we had quite a few quarrels about how the final mix should be. but since it was his project, the last word was on him and it didn't bother me too much, that i wasn't thoroughly happy with everything we've done.

but the songs are still great. i have heard them for the first time since 20 years now, when i digitized them for this website.

role managed to get some studio-time for real and recorded the whole bunch again in a professional enviroment - and with better musicians. i remember being a bit disappointed when i heard the final studio versions but maybe that was just hurt pride, 'cause when i listen to them now they obviously seem like better versions, than what we've done. at least the good guitar-player adopted my tapping guitar-lick on what's it worth... ;)  and the voices are much better indeed.

i've included our demo-versions first in the playlist, followed by the shiny studio-versions role later made without me.

check em out. they're really great!